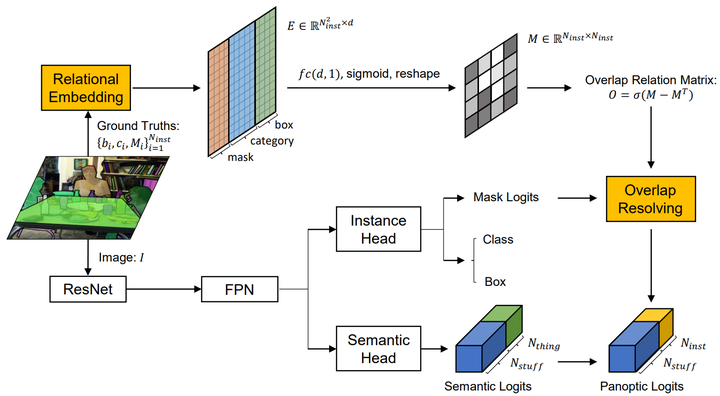 The panoptic segmentation task requires a unified result from semantic and instance segmentation outputs that may contain overlaps. However, current studies widely ignore modeling overlaps. In this study, we aim to model overlap relations among instances and resolve them for panoptic segmentation. Inspired by scene graph representation, we formulate the overlapping problem as a simplified case, named scene overlap graph. We leverage each object’s category, geometry and appearance features to perform relational embedding, and output a relation matrix that encodes overlap relations. In order to overcome the lack of supervision, we introduce a differentiable module to resolve the overlap between any pair of instances. The mask logits after removing overlaps are fed into per-pixel instance erb|id| classification, which leverages the panoptic supervision to assist in the modeling of overlap relations. Besides, we generate an approximate ground truth of overlap relations as the weak supervision, to quantify the accuracy of overlap relations predicted by our method. In experiments on the MS-COCO and Cityscapes datasets, we demonstrate that our method is able to accurately predict overlap relations, and outperform the state-of-the-art performance for panoptic segmentation. Code will be released.